WTF is with the ending of West of Hell? 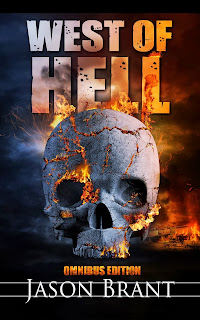 If you have not finished reading Sheol (West of Hell #3) yet, then you should NOT read this.

Now, for those of you that have finished West of Hell

and are a little perplexed about the ending…

I’m going to start this off with a question:  do you know what the words Gehenna, Tartarus, and Sheol mean?  If that question confuses you then follow the links or do some Google searches.  They aren’t just a couple of weird words that I made up.  I’ll give you a hint:  Hell.  (As in West of Hell (I’m so clever))

West of Hell was two stories combined, running simultaneously.  The goal was for you, the reader, to see whatever came naturally to you.  What the hell does that mean?  Some of you, actually most of you, see West of Hell as a zombie/western.  It is.  Others view West of Hell as a literal story about people escaping Hell and entering Heaven (Marom).  It’s that as well.

I can already hear some of you asking ‘what?!’

The whole point was to allow you to interpret the story however you see fit.  If it’s a zombie/western to you that’s cool.  If it’s a story about escaping Hell, that’s cool too.

How is it a story about escaping Hell?  Well, I put a shit load of hints throughout the series.  I’m not going to give you all of them, but I will name a few.  Half the fun is discovering them yourself. I also put references to other stories, the bible, lots of symbolism, etc, in random places.  Ready?

And there is a whole lot more.
So how did you initially see West of Hell?  As a zombie/western or as a journey through Hell?
Does knowing any of this make you want to read it again?