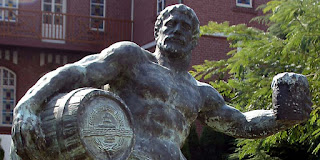 Nine Days into the new year and I’m already nine days behind.  Shit.

The flu punched me in the face last week.  I didn’t get off the couch for days.  I was so sick that I didn’t even drink beer last weekend – yeah, you heard that right.  I’m still feeling the remnants of it, but I’m back on my feet and writing again.  Unfortunately, I’m already WAY behind.  It’s going to be a serious rush to try and get my new book out by the end of January.  The first week or so of February is probably more likely.

On the bright side, Smelle Casey and I have been plotting our co-authored book together and I think we’ve got a pretty good idea of where it’s going.  It should be a fun ride with lots of douchery in it.

On Saturday I’m going to a convent (hopefully I won’t catch on fire when I go inside) to do some research for a book that I’ll start writing in March.  I don’t want to give away any details of it yet, but I really like the idea and I think you will too.  With any luck, this book will be released around the beginning of April.

After that, I have several more ideas that I’m kicking around, but I don’t know which one I’ll start.  At some point I do want to write that Echoes sequel I’ve been promising forever.

I hope that everyone else is doing better with their resolutions than I am!

« Total Recall Remake» WTF is with the ending of West of Hell?